And so it continues.

An associate recently brought to my attention the following article:

Ladybird made into ‘zombie’ bodyguard by parasitic wasp

Could it be, another zombie-related article on the BBC News website, so soon after this and this? The august public broadcaster seems finally to be giving proportionate attention to the threat of the undead, and indeed the possibility of them forming an entente cordiale with invertebrates. Had they been reading my bewilderingly prescient Ant! Zombies! series? I doubt it.

Read the article in question. Actually, don’t, it’ll just give the BBC another page imprint. Outside of the headline, the word “zombie” is not used once in the article. Nor is the broader expression “undead” or even the more refined “neurophagist”*. The situation set out in the article is clearly much closer to an Invasion of the Body Snatchers or even brain slug scenario than anything to do with zombies.

Ask yourself the following:

Do the infected ladybirds attempt to eat the brains of the uninfected?

Do they travel in packs, displaying imprecise motor skills?

Are they emblematic of our inherent solipsistic fear and hatred of all human beings and our unwillingness to accept that any emotions, motivations or thoughts contrary to our own could be in any way valid?

So why then is the BBC presenting this as a story about zombies?

The answer to that question is simple…

For years now the BBC has lost its way and strayed into areas outside its essential remit. As the state’s media arm, the BBC should fulfil two key roles:

As the offending articles listed above do not fulfil either of these roles, it would seem that the BBC are cynically trying to attract a youthful audience with frivolous “weird” and “random” articles. These rocket up the Most Popular menu pushing aside valid pieces relating to archaeological discoveries and developments in weaponry.

The capable youth (ages 15-43) of this once fine country should not be wasting their non-working hours scouring the internet for pointless ephemera. However, this behaviour has been encouraged in recent years through the complicity of our “public-service broadcaster”.

If our nation’s most capable are squandering their receational time with such idiocy, who then will teach children the importance of brutal loyalty to the regime? Who will instruct them in appropriate reproductive industry during woman’s most fecund period (no more than 3 children before 24, no fewer than 4 by 31)?

Should our vibrant youth have time left over after fulfilling these voluntary duties, they could always help out at some important public works projects, such as laying airstrips, breaking rocks, or hand-trimming grass verges on dual carriageways.

In short, there is no role for a state broadcaster in targeting the more valid and lucid members of a society who can better be satisfied with instructional documentaries and technical manuals. By churning out mindless distractions such as those shown above, and Dog Borstal**, the BBC is neutering the creative and productive endeavours of our most important demographic group. If this isn’t responsible for preserving the regressive Leftist hegemony in which we find ourselves, I don’t know what is. 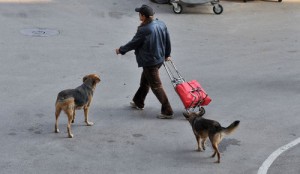