In a recent article entitled What should spaceships look like?, the BBC asks the following question:

As the next generation of spaceships is being conceived, should shuttle designers take their inspiration from sci-fi illustrators?

In posing such a question the BBC have clearly displayed their ignorance of this very blog. Had they been paying attention, they would know I have already definitively answered this question.

In a previous post, I outlined my deeply-held belief that prominent sci-fi authors should be placed in charge of our main space agencies, and made fully responsible for all future spacefaring endeavours. The by-the-book, pedestrian bean-counters who currently head up NASA and ESA have consistently displayed a grievous lack of ambition and imagination with regards to humanity’s inevitable conquering of the galaxy (something I call Maniquest Destiny), and therefore it is essential that we hand the reins of power of these agencies over to those best equipped to handle them. Only unfettered and powerful imaginations can conceive of the kind of spaceships required to propel mankind to its rightful place amongst the stars, making up for decades of farting about with lunar golf buggies.

Of course, this argument is not only a technological one; it also applies to aesthetics. I would’ve thought this was implicit in my original argument, but it seems I have to state it explicitly for the robber-barons at the BBC to get their tiny minds around it.

Not only should sci-fi authors design and build our future spacecraft, sci-fi illustrators should decide what they look like.

There are a number of accomplished sci-fi artists out there churning out breathtaking spaceship designs that shit all over NASA’s balls. I aplogise for using such a graphic metaphor, but I am simply attempting to highlight the massive gulf in quality.

Amongst these artists’ works of art, you might spy beautifully-rendered dark-matter incinerators. Expertly-sketched inertia-compensated warp capacitors. The accurately-captured glint of a supernova on an osmium-plated photon ejector.  The impression of heat radiating from a magnificently-realised hull-mounted superlaser broadside.

What design does the Establishment offer up, time and time again?

A slightly different take on the traditional space shuttle.

When we encounter our first galactic civilisation, we surely don’t want to turn up in a typically uninspiring NASA-designed spacecraft. That will be seriously embarrassing. The aliens’ disdain of our aesthetic standards will make them all the more difficult to subjugate.

However, if we arrive riding in sweet-looking space cruisers bristling with Iain M. Banks-style laser bubbles and Carlos Ezquerra-inspired armour-plating, we will give those stupid-looking (presumably) aliens something to think about. Perhaps they will just submit to us right away, elimintating our need to conduct carpet bombings of their major civilian centres.

Mayhap prominent sci-fi illustrators will use this blog post as a unifying manifesto, and rally behind my words. I am happy for this to occur, and in fact deeply encourage it – provided, of course, that I am recognised as the rightful leader of the movement.  Perhaps a magnificent standard could be woven, featuring a close-up of my face in one of my pensive moments, and borne proudly by Chris Foss at the front of the van. Together we can storm the corridors of power, and take our place at the helm of Earth’s major space agencies, tossing the imagination-less bean-counters and their lackies out of the windows.

As an addendum to this piece (actually it is probably more accurate to term it an annex), I would like to submit my own work for consideration. I admit that I am not much of an artist – more of a dreamer – but I have in the past tried my hand at spaceship design. Below I have included some of my early efforts, created circa 1998 as part of a scholarly endeavour. 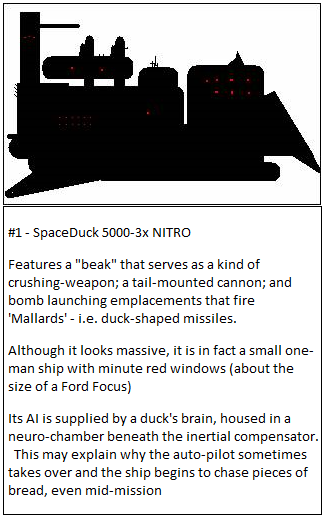 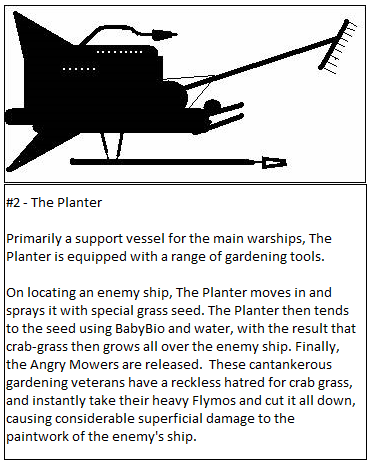 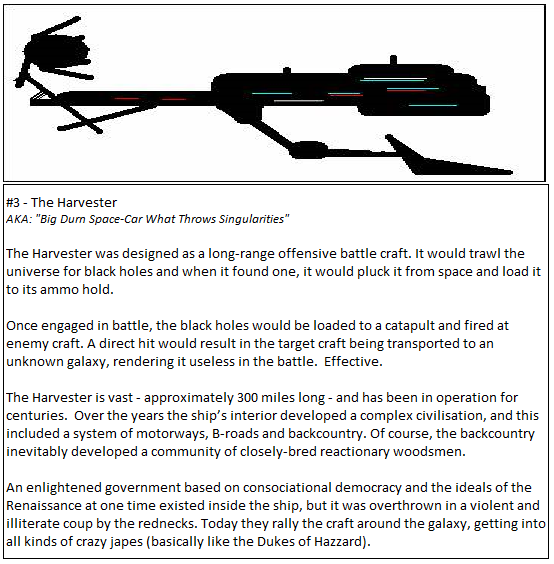