Several months ago I made the decision to travel to London for a couple of days.

The primary reason for the trip – I wanted to catch the London leg of Rush’s Time Machine Tour, which was scheduled to take place in the 02 Arena on 25th May.  The secondary reason concerned a nuanced sociological research experiment that I planned to undertake (which later came to be referred to as a “Cockney Hunt”).

To my lasting chagrin Rush, when arranging their tour schedules, continue to ignore the historic city of Belfast, as if it were some unremarkable urban centre of meagre importance. They act as though Belfast was not in fact the home of the mightiest shipyard Europe has ever seen; the greatest rope-works the world has ever known; and the sort of magnificent linen industry that would make you fall to your knees and weep with joy.

Belfast could deliver a huge army of Rush fans were she given the opportunity to do so. I am sure of it.  I know of at least 2 Rush guys in Carrickfergus alone (the bus driver who wears the Fly By Night T-shirt, and that weird bloke in the chippy who thinks he’s in charge of the vinegar).  Extrapolating from this, I estimate there are tens of thousands of Rush fans in our capital city, just waiting for Geddy and the lads to pitch up at the Odyssey Arena and launch into a 3-hour virtuoso showcase. Maybe Geddy could even give the old tin whistle a go.

But, as it was, I had resigned myself to the idea of travelling over to the “Big Smoke” in order to observe my Canadian heroes in the flesh. I know very little about contemporary London and felt some apprehension at the prospect of travelling there.  My mind was full of images of overcrowded, malodorous streets where orphan boys in knee-high socks pick the pockets of well-dressed city gentlemen.  Perhaps I had read too much Dickens.  Because actually, London is not like that. No – it is far, far worse.

I arrived at “Heathrow” airport mid-morning. Man, is it ugly. That sprawling behemoth of an airport needs a major facelift to bring it into the modern age. There is far too much plain concrete on display. I made a few notes about possible improvements as I waited to disembark the plane, such as “neon strips should be laid along the edges of the runway” and “replace all runway concrete with gun-metal grey asphalt”. I may send these notes to the Heathrow authorities.

I felt as if I had been indecently interfered-with when charged £30 for a return ticket to Paddington station on the Heathrow Express.  I asked an Asian gentleman if he felt the same way, but he must not have spoken English, as he just looked at me and hurried off.  Naturally I am used to being financially ripped off by Translink in Northern Ireland, but considering that London is a megalopolis built on its public transport backbone, I had naively assumed travel would be reasonably priced.

I quickly came to realise that London is an expert when it comes to disappointment.

From Paddington I took the “Tube” to Bayswater, where my four-star hotel was situated.  The Tube is remarkable in many ways.  For one – the commuters do not talk to one another. You have all of these people in close proximity, and nobody utters a word.  I had planned to canvass public opinion on the extortionate cost of travelling on the Heathrow Express, but one look at the iron-hard countenances of my fellow passengers told me conversation would not be welcome.

I know that London is multi-cultural, but the ethnicity spread of the commuters was through the roof. I believe I saw more different racial permutations on that one carriage than I have seen cumulatively in the rest of my life (though blessed with a rich history, Carrickfergus is not a cosmopolitan town). The train was hot and stuffy, and a beggar was playing a gratingly jaunty tune on a clarinet.  It felt like the Mos Eisley Canteena, and I was glad to get out of there.

I dropped my suitcase off at my underwhelming hotel and made for the city centre.  I decided not to take the Tube this time and instead walked, heading down “Queensway” and along “Bayswater Road” towards “Oxford Street”.  I found it difficult to get used to the number of people strolling around Marble Arch, but that was before I hit Bond Street.  I literally had no conception that that amount of people could gather in one place.  There were tens of thousands of them milling around the many shops, loaded up with shopping bags. All of them seemed to be wearing a ridiculous type of sunglasses that had horizontal plastic strips obscuring the field of vision.

Oxford Street is a mess, packed with cheap shops that promise to unlock your mobile phone.  Parts of Soho are so built up and crowded they feel like the smuggler streets of Nar Shaddaah (pre-Yuuzhan Vong conquest, of course).  By this time I was ravenously hungry, so I looked about for something to eat.  I had read about the amazing array of ethnic cuisines available in Soho, but I didn’t fancy the prospect of a dodgy tummy, so I stuck with a foot-long Subway.

At 4 o’clock I decided to make my way to “Greenwich” where the 02 Arena is located.  I started spotting Rush guys as I neared the River Thames (which is a surprisingly clean-looking waterway –  I had expected it to appear much like an open sewer) and this got me very excited.  I was wearing my limited edition 2112 t-shirt, and I received many nods of approval from gnarled old Rush veterans as they passed me by.  Eventually I boarded a Thames Clipper waterbus headed toward Greenwich, and opened a tin of lager to get me in the mood.

The journey to the pier by the 02 would take 40 minutes, so I sat there and looked out at the passing city whilst supping my beer.  For a while this proved a rewarding pursuit, and I watched magnificent old buildings and impressive modern skyscrapers slide by.  I spotted a few famous buildings here and there, and I don’t mind admitting that the beer was going to my head a bit, resulting in me loudly exclaiming each new discovery.  “The Gherkin!” I announced.  “St Paul’s!” I yelled.  I was soon asked to keep the noise down by a fat woman in a lifejacket.

However my reverie was short lived, for once we passed Canary Wharf, we entered a horrific visual wasteland.  That particular section of the Thames is bordered on both sides by endless miles of modern apartment blocks, with absolutely zero aesthetic appeal. Turning instead to observe my fellow passengers, I noticed a big, bearded Rush guy in a Caress of Steel T-shirt listening to headphones and playing along enthusiastically on invisible air-drums.  I watched him play for a while and identified a drum fill from La Villa Strangiato.   I went over and tapped him on the shoulder, asking him if I had correctly called the song.  He was impressed, and we got to talking.

He proved an interesting chap who had come up from South London, and we discussed many important matters during the remainder of the journey, including the London congestion charge; the logistics of the relatively new bike-hire scheme; and the precise height of Ser Gregor Clegane.

I had a drink with the bearded one in a bar of the O2 Arena after we had disembarked the Thames Clipper.  He drank a pint in three goes, which I frankly found a bit intimidating.  By the time I finished my half pint of London Pride, he was on his third pint of Carlsberg.  I made my excuses and left the mad drunk behind, making my way to my seat, from where I suspected I would behold an evening of magic.

It was truly a night to remember.  When Rush played Subdivisions tears of joy streamed down my face in salty torrents.  Red Barchetta had me standing on my seat.  Suddenly ahead of me / across the mountainside has always been the most glorious moment in music for me, and when the Gedmeister launched into it I felt like I was in heaven, for surely the angels listen to naught but Rush.

It is no secret that Rush appeals to a certain demographic, and nowhere was this more evident than in the queues for the toilets during the intermission.  The male toilets were crammed with white men over the age of thirty-five, and the lengthy queue snaked its way around the corridors and concession stalls.  The female toilets were seemingly empty, as I observed no more than five women leaving or entering within a ten minute period.  I took some photographs of this interesting phenomenon, which I have included in this post. 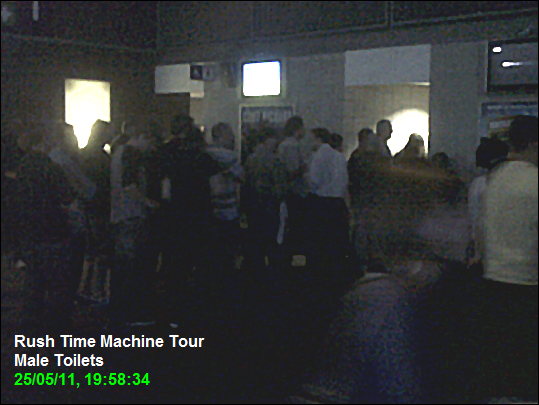 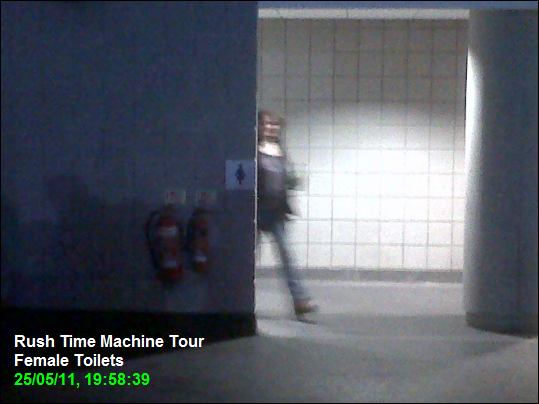 Neil Peart’s drum solo was a thing of beauty, and its 20 minutes passed in what seemed an instant.  The Cygnus X-1 set closer left me grinning like a simpleton, and when I realised that Rush were leaving the stage I felt a momentary sense of loss.  However as I left the endorphins continued surging through me, and I spent the rest of the evening in a happy daze. I cannot recall getting back to the hotel, so buoyed was I by all I had seen and heard.

You can keep your heroin.  You can shelve your “crack”.  For I am a Rush addict, and every hit is sweet.

I was up and about early the next day.  I travelled by Tube to the East End, where the Cockneys live.  I have always been suspicious of Cockneys – their ribald cackling, their deifying of murderers – but I had resolved to hunt some down and observe them in their natural habitat.

To be honest, it was not a successful endeavour.  I didn’t spot any typical Cockneys as I walked around Whitechapel.  People there looked professional and almost law-abiding.  Even the rougher areas – such as Aldgate and Bethnal Green – were empty of traditional Cockneys, and instead full of immigrants in all sorts of mad hats.

It was very disappointing.

At one point I did encounter a couple of genuine Cockney fellows.  They were obviously builders on a break, and the two were lounging outside a bakery, each reading a copy of the Sun newspaper.  I overheard one of them say to the other “Cor blimey, that bird’s a bit tasty, ain’t she geezer?” (this may not have been exactly what they said, but I have captured the essence of it).  I became very excited at my discovery but I was hard pressed for time, so unfortunately I could not linger to eavesdrop on them as they planned their next scam / bank robbery.

I returned to dismal Heathrow that afternoon via the rip-off-train, and had an uneventful flight home.  I must say I was glad to return to the familiar and friendly environs of fair Carrickfergus.

In conclusion, the trip was undeniably a success, as I got to see Rush perform a three-hour set of total epicness.  However, London itself was a big disappointment.  I don’t know why everyone raves about it.